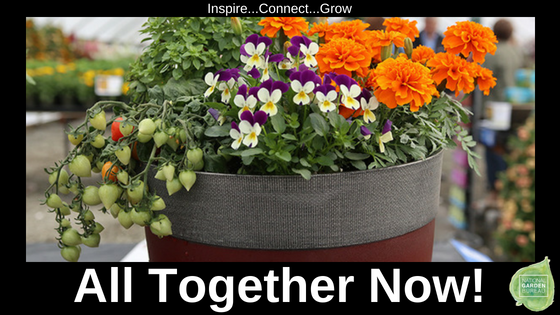 When did vegetables and herbs become something to be segregated from flowers?

So often you see a vegetable garden fenced off in a corner of the property and a flower garden near the house. It seems that at some point it was decided that vegetables are too ugly to be included in an ornamental garden.

This idea is changing though. Growing edible plants alongside purely ornamental plants is no longer novel. Sometimes edible plants are being grown specifically for their ornamental use, with no plans for them to ever end up on your plate.

There’s also the fact that our gardens are becoming smaller which might be the factor for the desegregation of edibles and ornamentals. Gardeners want to grow it all, but in a small area, they must all share the same space.

But the “why” isn’t really all that important because I’m here to tell you that vegetables can be beautiful and you ought to grow them just for that. I don’t even care if you don’t eat them. Look at them as though they were any other annual that you’d be planting: Is it a pretty plant that will do what you want and grow where you’re planting? Then plant it.

And that’s exactly the message that plant breeders were delivering at California Spring Trials, where edibles both specifically designed for containers and others bred for the garden showed up as partners to ornamental plants. I was thrilled to witness this trend (you heard it here first) firsthand as a guest of the National Garden Bureau.

Containers are a great place to play around with plant combinations that include edibles. And one of the best edible plants I can think of for pairing with other plants is Swiss chard. It has shiny, bright green leaves and, depending on the variety, may have a bright stem color that you can pull out in other plants. It also offers a bold texture that really helps pull a container together. The other great thing about Swiss chard is that you can eat it without ruining the look of your container. Just eat the outer leaves and allow the new leaves in the center to mature before you scarf those down too. 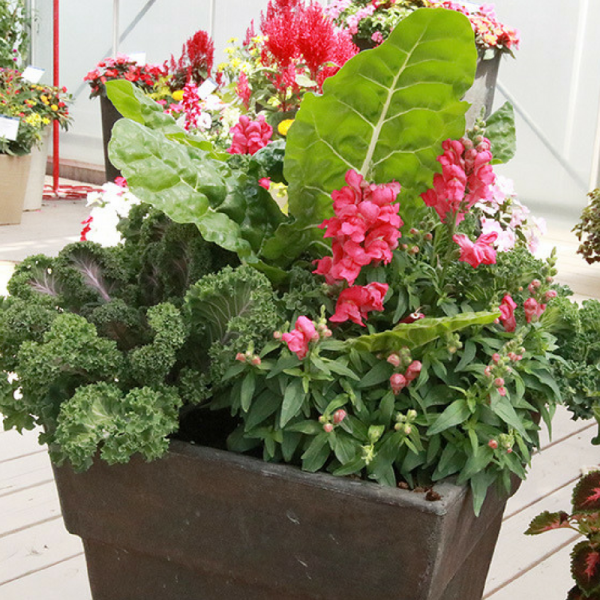 Swiss Chard, Kale and Snapdragons in a container garden. 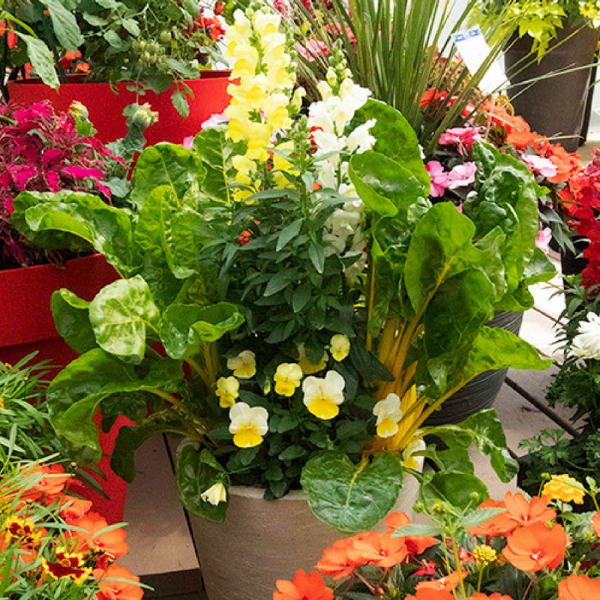 Swiss Chard, Snapdragons and Pansies in a container garden. 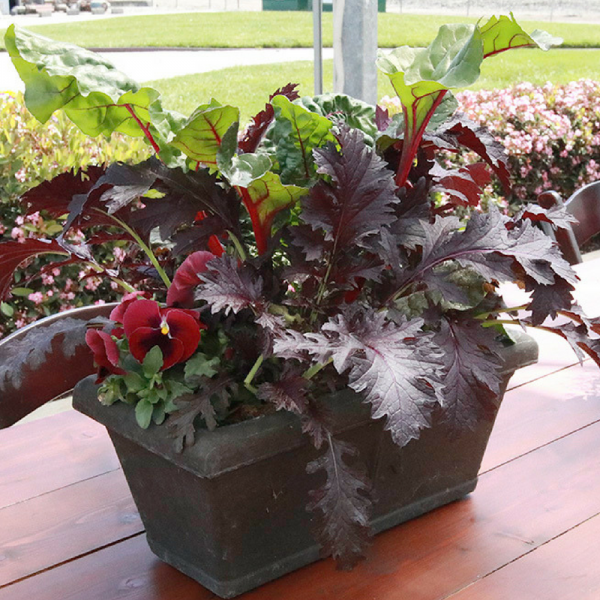 Swiss Chard, Kale and Pansies in a container garden 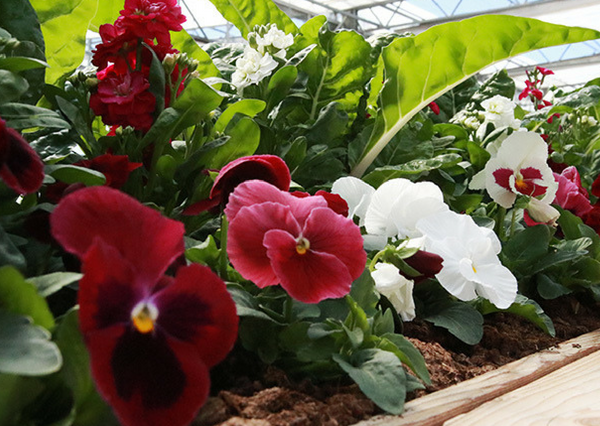 Swiss Chard and Pansy in a bed. 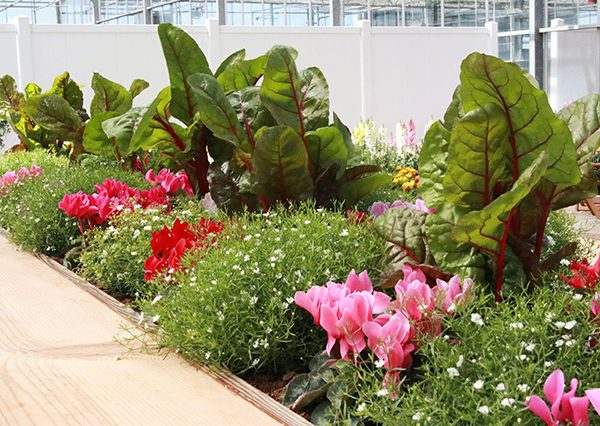 Swiss Chard, Gypsophila and Cyclamen in a bed.

There are so many other greens that look fabulous in a container. Lettuce is beautiful in a spring container, but odds are it will be too hot in summer for it to continue growing.

New strawberries on the market are specifically designed for container gardening (although they can be grown in the ground as well), with foliage that looks great all year, pretty flowers and fruit that dangles just over the edge of a container. Strawberry Delizz is a great one (and the first All-American Selections winning strawberry) with white flowers, and in 2019 Proven Winners is releasing a pink-flowering and a red-flowering strawberry. Tucked along the edge of a container, a strawberry can add a great foliage accent, a few flowers, and beautiful red fruit. 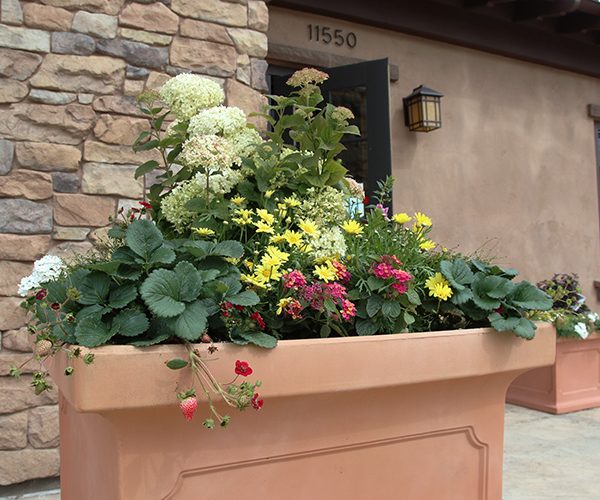 Strawberries and Flowers in a container garden. 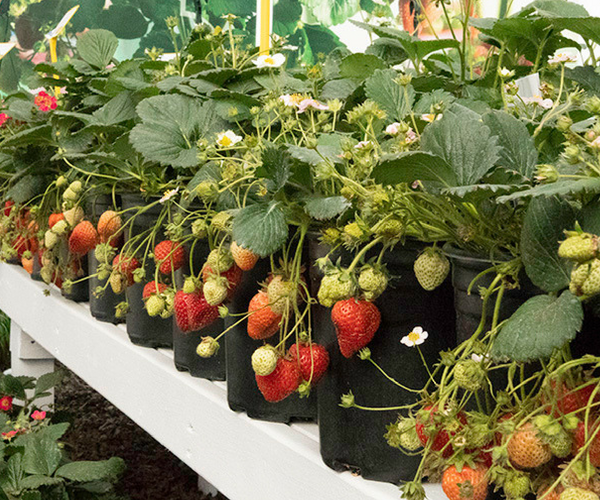 Even small trailing tomatoes showed up in ornamental container designs. And herbs, which provide fabulous textural foliage, offer that contrast that many containers are lacking. 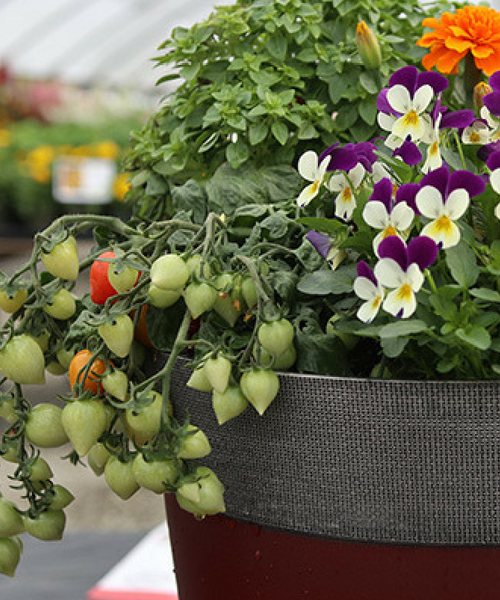 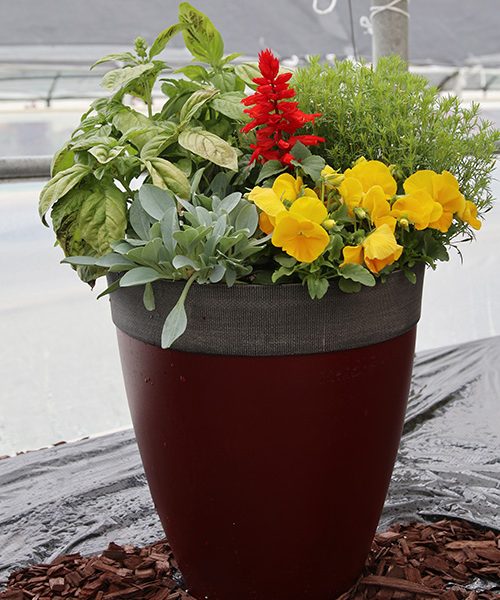 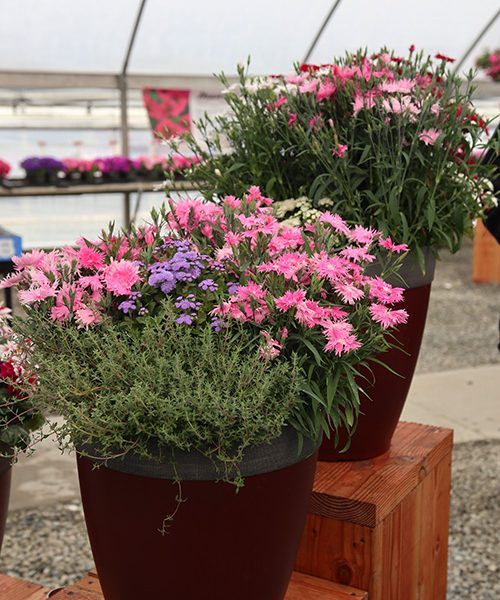 Thyme and flowers in a container garden.

Who says you can’t have pretty containers and eat from them too? 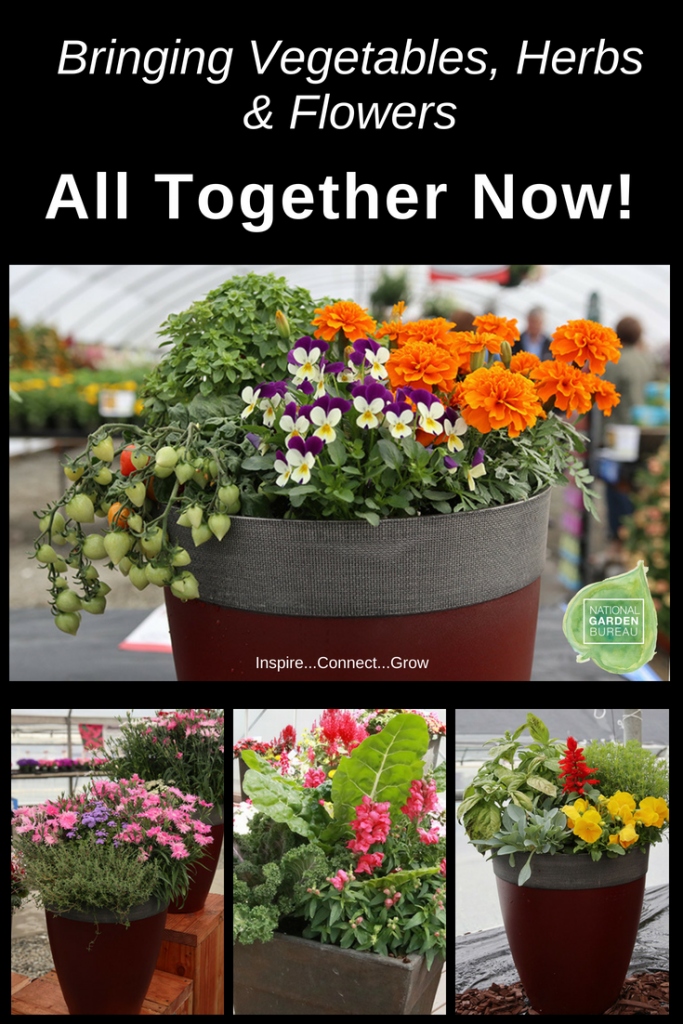 This is the basis of all permaculture! It’s really great to see these symbiotic relationships in action. Thanks for the write-up.

Thanks so much for the interesting videos. I have did share the information and site to several of our staff who work with volunteers here at Mercer Botanic Gardens. Jeff

I would like to see edible flowers, vegetables, and herbs together, but not inedible or poisonous flowers and vegetables or herbs. Also pairings that take into account which plants can grow together for each season and which combinations have the same water and zone needs.