In this, the Year of the Iris, let’s talk a bit about a Victory Garden 2.0 fall gardening task that comes up every few years: dividing your bearded irises (Iris × germanica). This iris, often called German iris, produces large multicolored flowers in late spring or early summer that bear, on their slightly drooping sepals, a fuzzy “beard”, hence the name bearded iris. 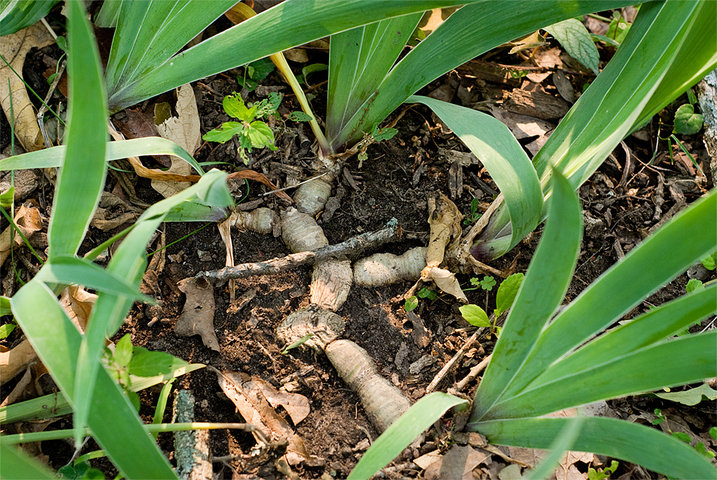 Those lumpy rhizomes at the surface of the soil are clear identifiers: this is a bearded iris!

You can easily distinguish a bearded iris from other irises (and there are many species of iris!) by its broad, sword-shaped leaves that fan out at the ends of thick rhizomes on the surface of the soil or only partially buried. With other irises, there is either no rhizome or only a very small one that is well hidden: if you see a curious structure reminding you of an elongated potato at the base of any iris, it’s certainly a bearded one.

Unlike most perennial irises, which remain green and lush through the summer, these irises enter in a sort of partial dormancy six to eight weeks after flowering and their foliage dies back a bit at the tip. In all honesty, they’re not particularly attractive at this stage. Take this slowdown as a sign that, if you need to divide your iris, it’s time to do so. This is therefore something you would normally do between mid-July and the beginning of September. 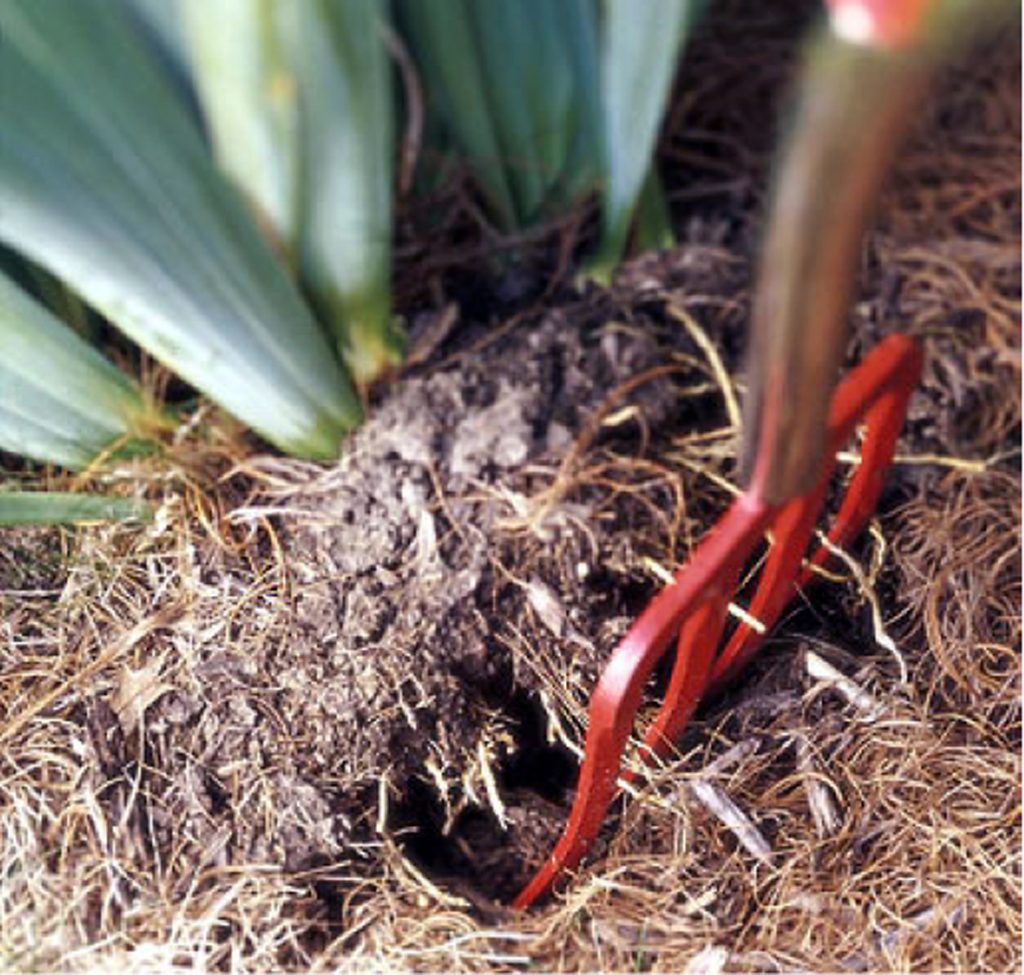 Mid to late summer is the time to divide bearded irises.

Most other irises can stay in the same spot for ten years or more without needing division, but bearded irises will decline fairly quickly if you neglect this step. After three to five years of growth, it will have reached a stage where no longer blooms in the center and even the bloom on its periphery is decreasing. Soon, you’ll be seeing more bare rhizome than foliage!
Division rejuvenates this iris … and also allows you to put it back in its place because otherwise it tends to wander or becomes much larger than you really wanted. 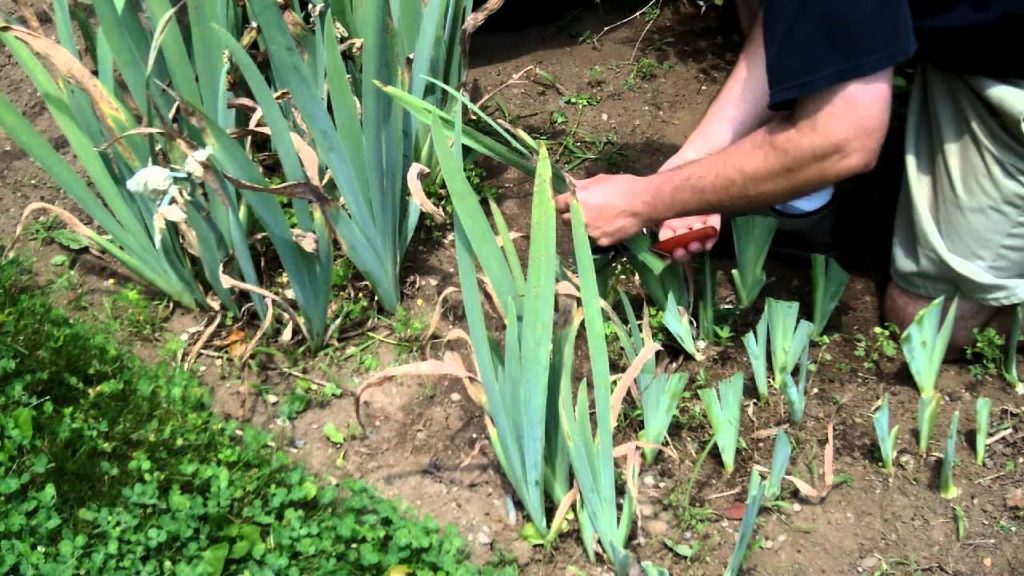 Start by cutting back the foliage

To divide a bearded iris that has started to decline, start by cutting back its foliage by half or even two thirds: this will reduce its subsequent water requirements as well as transplanting shock. Then, dig up the plant, keeping as many roots as possible. This will often give you a huge clump, sometimes 3 feet (90 cm) wide! Rinse the root ball well with a garden hose to wash off enough soil so you get a better view of what you are doing. 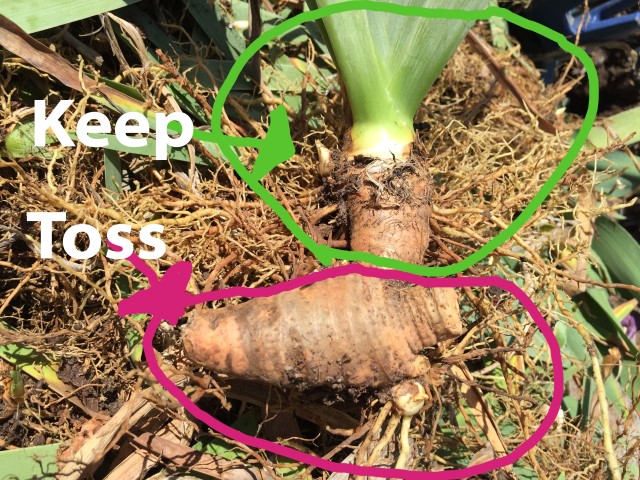 Spent rhizomes won’t bloom again and you can compost them.

With a sharp knife, begin to separate the rhizomes, keeping only the plump ones with a fan of leaves at their tip. Compost any rotten, weak or leafless rhizomes. 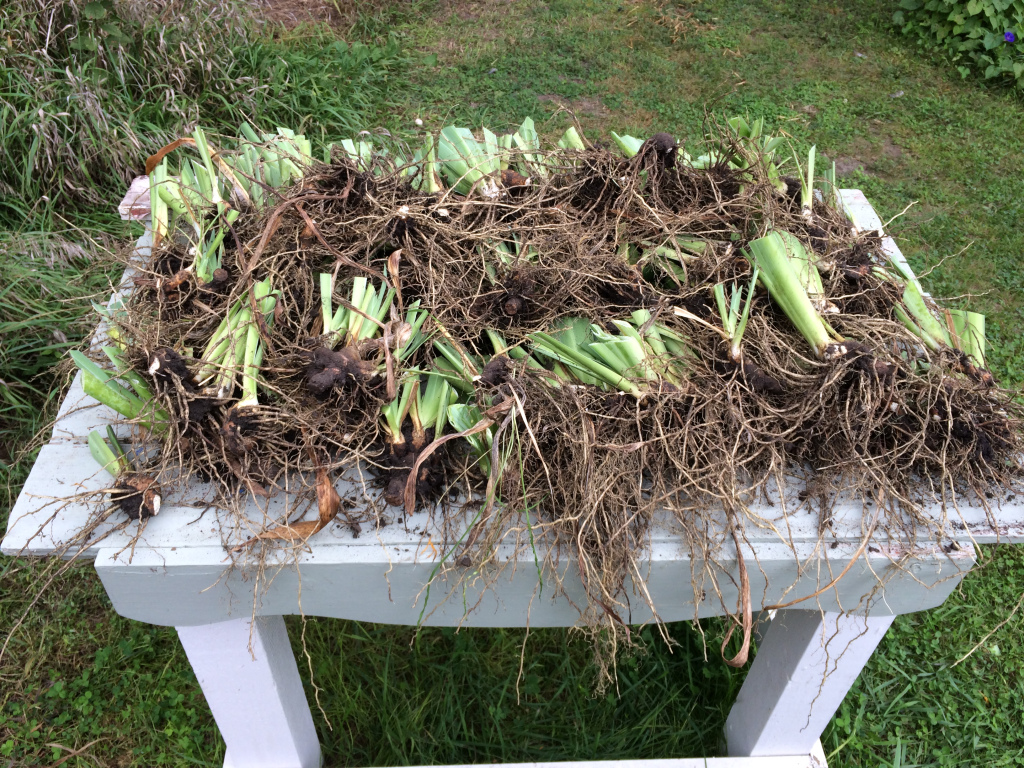 It can be wise to let divisions dry out a bit before replanting then.

Allow the selected rhizomes to dry for about 24 hours (to allow the wounds to heal and reduce the risk of rot). If you are in too much of a hurry for this, at least brush the wounds with a solution of 1 part bleach and 10 parts water in order to sterilize them.

If you decide to move your irises to a new spot, remember that they prefer full sun with perhaps some afternoon shade. Partial shade is acceptable but may reduce blooming. The soil should be rich and, above all, well-drained: unlike most other irises, many of which are moisture-lovers, bearded irises require soil that dries thoroughly between waterings.

Ideally, the soil would be neutral, with a pH of 6.8 to 7.0, but these irises will also tolerate more acid soils, down to a pH of 6.0, without too much difficulty. Take advantage of the transplanting process to add some compost or a slow-release fertilizer (you pick which one: the iris really doesn’t care!) to the soil you’re working with. 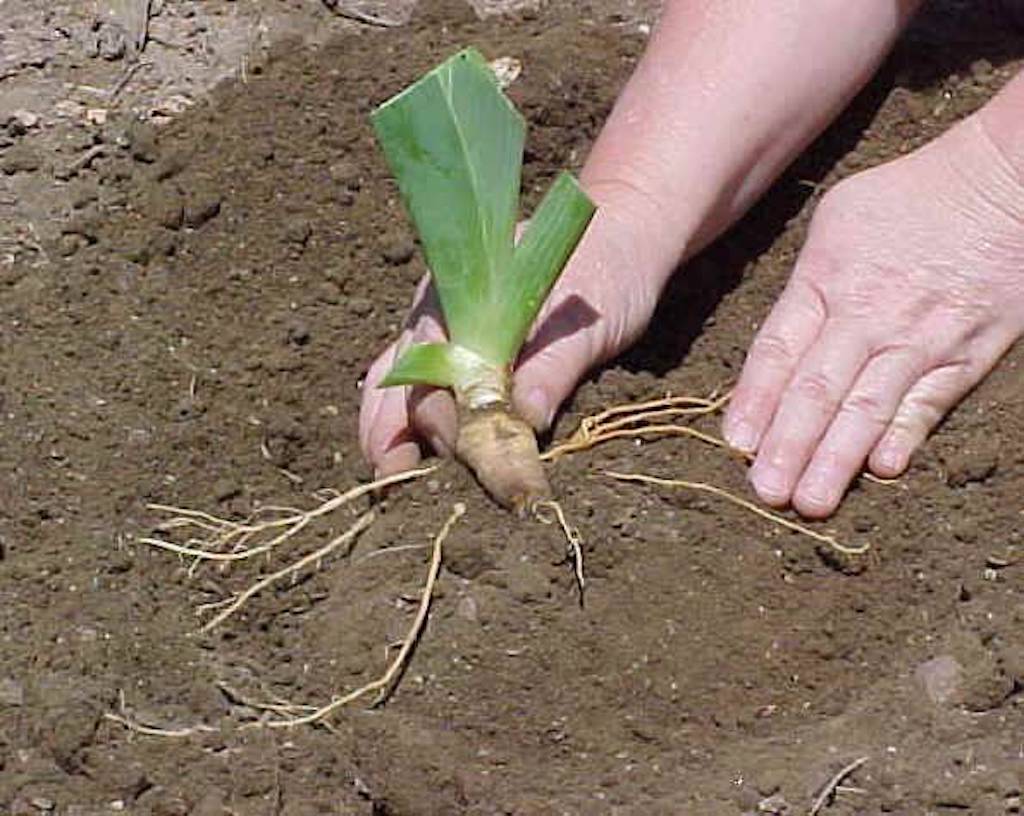 Plant the rhizome on a mound, draping the roots down all around it.

Once you have chosen a location, replant each rhizome horizontally, placing them about 1 foot (30 cm) apart. (That may seem like a lot, but remember, they fill in quite rapidly.) Don’t set all the rhizomes facing the same way. Some tufts of leaves should point out and others in. That way, the rhizomes will develop in all directions.

To place the rhizomes at the right level, dig a planting hole about 5 inches (12 cm) deep and large enough to accommodate 5 to 10 rhizomes, then form small mounds of earth 4 inches (10 cm) high, spacing them carefully. Place a single rhizome on each mound, letting the roots drape down all around. Then fill the hole with soil so that the top half of the rhizome remains exposed. Some gardeners prefer to cover the rhizomes with soil, but if so, take care that the junction point between the rhizome and the tuft of leaves at the end is not covered: it should remain at the surface of the soil.

To Mulch or Not to Mulch?

The use of mulch on German irises is controversial. The old school claims rhizomes must stay exposed to the sun at all times, while the younger generation of iris growers purports that a thin layer of mulch (no more than an inch or so/2–3 cm) does no harm. Personally, I always mulch irises. If I don’t, the abundant empty space between the rhizomes quickly fills in with weeds … but, hey, it’s your iris! You decide! 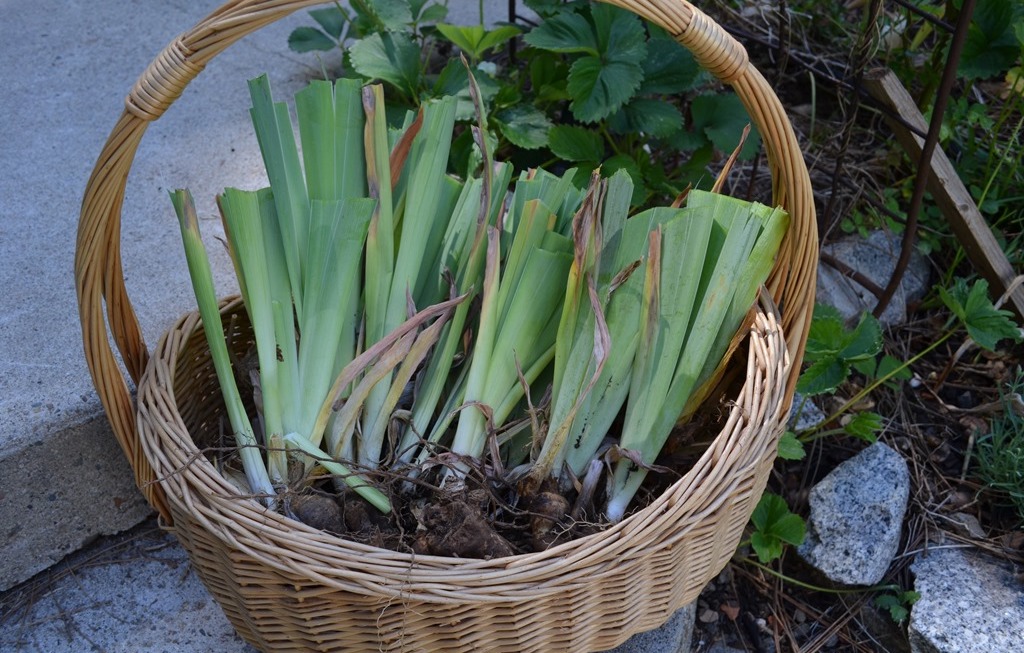 Give a gift of rhizomes and share your passion!

And there you go! Your irises will be well planted and ready to bloom next spring. But one question remains: what to do with all the extra rhizomes? Because you’ll soon discover that each time you divide an iris, you end up with a pile of rhizomes for which you have no space.

Why not give them as a gift to your neighbors who are less into gardening? Even teach them with a little class on how to plant them. Before long, surprised by the beauty of the irises they planted, they’ll become as avid about gardening as you are!

Cut foliage by 1/3 when Iris foliage starts to dry out.

Pin It for Later: 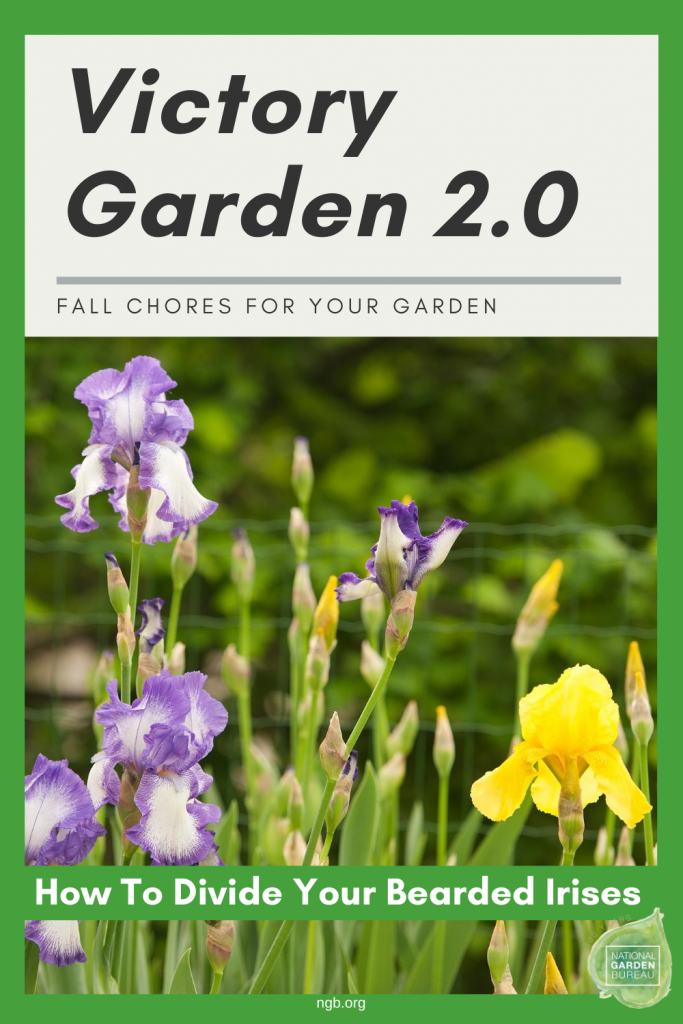