Celebrate the Year of the Monarda

Monarda is a genus that has a long history as a medicinal herb. As the common name Bee Balm implies, it has also been used to soothe bee stings.

But did you know the Oswego Indian tribe used this plant to make an herbal tea and they taught the early American settlers how to do so as well? This just happened to come in very handy following the Boston Tea Party. As the settlers revolted against the British tax on tea, they drank tea made from Monarda instead, thus thumbing their noses at the British and their taxes.

Monarda is a member of the mint family and consists of multiple species, most of which are hardy perennials and all of which are native to certain regions of North America. Summertime flowering on all these species is quite attractive to humans and pollinators. 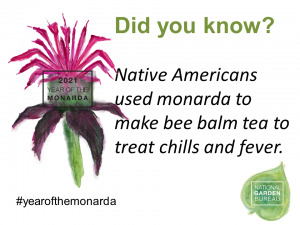 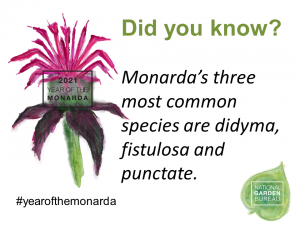 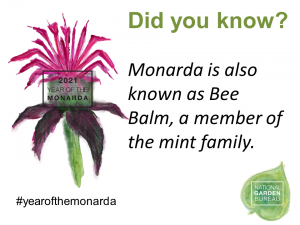 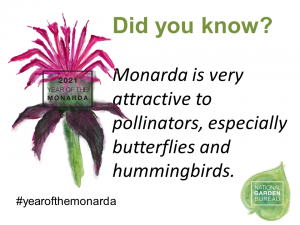 Monarda punctata, aka Horsemint or Dotted Mint, is a somewhat unruly native prairie plant characterized by tall unbranched stems topped with rounded clusters of pink or lavender tubular flowers. The stacked combination of speckled flowers and colorful bracts make this distinctive and unusual.

Monarda fistulosa, or wild Bergamot, is one species commonly used for medicinal purposes. Being highly aromatic with showy lavender-pink flowers, it is also used as a honey plant.

Monarda didyma (Scarlet Bee Balm) has long been cherished for not only its use for tea but also its ornamental value. The bright scarlet/red flowers of M. didyma are still a part of many ongoing breeding programs with Monarda.

It has been a long road from these native species of Monarda to the prized ornamental cultivars available today. Some of the first hybrids of M. didyma x M. fistulosa produced vibrant flower colors with a more well-behaved plant, but they continued to be plagued by their native attributes of being highly susceptible to mildew, somewhat tall and leggy and had a tendency to spread by rhizomes.

Modern breeding has introduced many new cultivars that are much more suitable in the ornamental landscape. Along with many stand-alone varieties with notable attributes of their own:

There are several newer Monarda with formidable attributes: 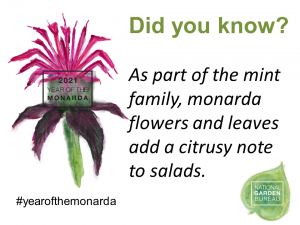 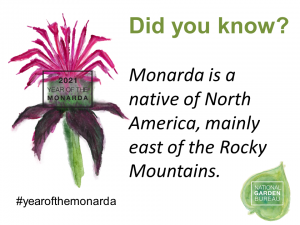 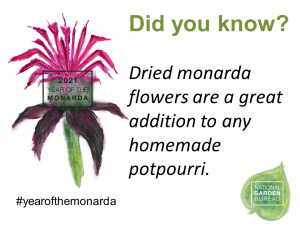 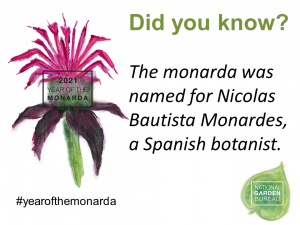 Monarda brings a lot of charm and interest to the garden. En masse plantings in naturalized areas are a showstopper and create a high-traffic area for butterflies, hummingbirds, and bees.

Enjoy these as specimen plants paired with your favorite summer-into-fall bloomers in the middle of the garden. When they are in full flower (with a few to spare), you can pick a few flowers and leaves to make a batch of iced Bee Balm tea and watch the garden grow.  Or dry some and save it for hot Oswego tea on a cold winter’s night!

Learn more about Monarda from our NGB members… 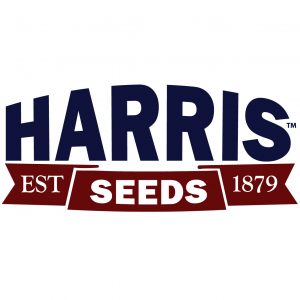 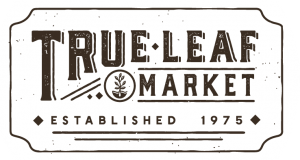 The National Garden Bureau recognizes and thanks to Darwin Perennials, as author and contributor to this fact sheet. 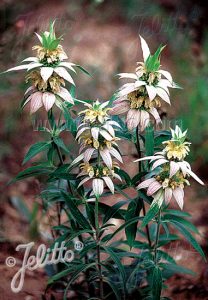 A a unique pagoda-style bloom that people and pollinators equally love! 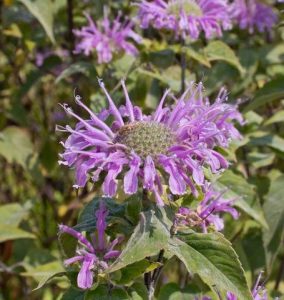 These Bee Balm seeds produce curious flowers that vary in shades from pink to lavender.

Shop for “Year of the Monarda” products on RedBubble 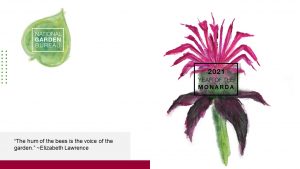 The Year of the Monarda SlideShare presentation

The Year of the Monarda PowerPoint presentation

Download the Year of the Monarda logo
PNG or JPG

Printable version of this Fact Sheet

“Did You Know” Fun Facts about Monarda