Did you know that the dahlia is the national flower of Mexico?

The native dahlias found in the mountains of Mexico and Guatemala are the genetic source for the modern hybrid dahlias we grow today. While busy conquering the Aztec nation, 16th-century Spanish conquistadors pursued numerous side explorations that led to the discovery of the New World plant life. Botanists accompanying the soldiers discovered what is sometimes referred to as the tree dahlia (D. imperialis). The hollow stems of these plants, some growing to over 20 feet, were often used for hauling water or as an actual source of water to traveling hunters. In fact, the Aztec name for “tree dahlias” was “acocotli” or “water-cane.”

About 200 years passed before dahlia seeds, roots, and plants found their way to Spain and other parts of Europe. The Madrid Botanical Gardens named the genus for Andreas Dahl, a Swedish botanist, and student of Carl Linnaeus. Initial breeders of dahlias were more interested in the dahlia as a food source since the blooms at that time were not particularly noteworthy.

In 1872 a new box of dahlia roots was sent from Mexico to Holland and the only survivor produced a brilliant red bloom with petals that were rolled back and pointed. Immediately dahlias regained their place on the benches of plant breeders who began to successfully combine this new variety (D. juarezii) with parents of early varieties. These progenies have served as the parents of today’s hybrids. Breeders today propagate new cultivars using various techniques and creating fantastic new colors, shapes and plant habits that perform well in the garden.

Dahlia is a genus of tuberous plants that are members of the Asteraceae (or Compositae) plants; related species include the sunflower, daisy, chrysanthemum, and zinnia. There are many species of dahlia in a range of colors and forms with hybrids commonly grown as garden plants. The flower varies in size and form. Each flower can be small or large, ranging from 2” in diameter to up to 15 inches. The largest flower form is informally known as a “dinner plate” dahlia.

The American Dahlia Society (ADS) categorizes today’s dahlias into various groups based on size, form, and color. Those details can be found here.

There are several ways to enjoy your first dahlia. Most major garden centers, home improvement stores, and mail-order sources sell dahlia tuberous roots (a thick, underground stem or rhizome) as well as blooming potted plants. This root looks like a  sweet potato that grows under the soil surface and sends up strong stems. Additionally, almost every dahlia society has sales and they welcome guests to those events.

Your tuberous root can go directly into the ground in the spring when the ground is warm and there is little chance of frost. One good guideline is to plant at the same time as you would a tomato. If you want blooms as early as possible, you can start the them indoors in good light about a month before planting time. By starting early you could have a small plant ready to transplant at planting time.

Dahlias require a site with good drainage and partial to full sun. Mono-culture and combination containers are also an increasingly popular way to grow dahlias.

Most dahlias need to be staked to avoid falling over at maturity. Best practice is placing the stake prior to planting to avoid damaging the roots. Tomato cages can also be a simple approach to staking.

Plant according to the package directions with the “eye” on the tuber facing up. The eye is the point on the shoulder, or crown, of the tuber from which the plant grows.

If you are buying potted plant dahlias, simply transplant into a prepared garden bed or decorative containers.

Protecting your plants from pests

Small dahlia plants are susceptible to slug damage. It is a good idea to manually remove slugs or to protect them with a commercial slug killer.

Japanese beetles seem to enjoy dahlia blooms just when they are ready for a bouquet. One of the best methods of control is to manually remove the beetles and drop them into a bucket of soapy water.

If other insects such as earwigs, thrips, or aphids become a problem, and you want your blooms to be “perfect” then you might want to consider using an insecticidal soap or a commercial pesticide. Follow label directions carefully when using any pesticide

Deer problem? Dahlias are low on the deer’s list of favorite foods. While dahlias are not “deer-proof,” they are deer resistant.

Dahlias do not need a lot of water; in fact, excessive watering early in the season can lead to rotting. Best practice is to monitor the soil moisture especially if the local rainfall is less than one inch per week. In containers, Dahlias will require more water because of their limited soil volume.

Dahlias will generally benefit from regular treatments with a water-soluble or granular fertilizer. Traditional wisdom for dahlias is to treat with a high nitrogen fertilizer early in the season and then transition to a bloom-type fertilizer (lower nitrogen and higher in potassium and potash) in the middle part of the season.   You should stop fertilizing later in the season or about the first of September.

End of the season

Go to the American Dahlia Society for this article on how to harvest and store your tuberous roots.

The National Garden Bureau recognizes and thanks The American Dahlia Society as author and contributor to this fact sheet. 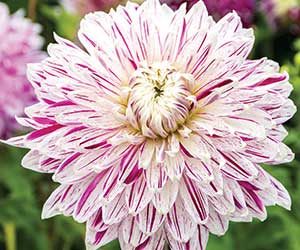 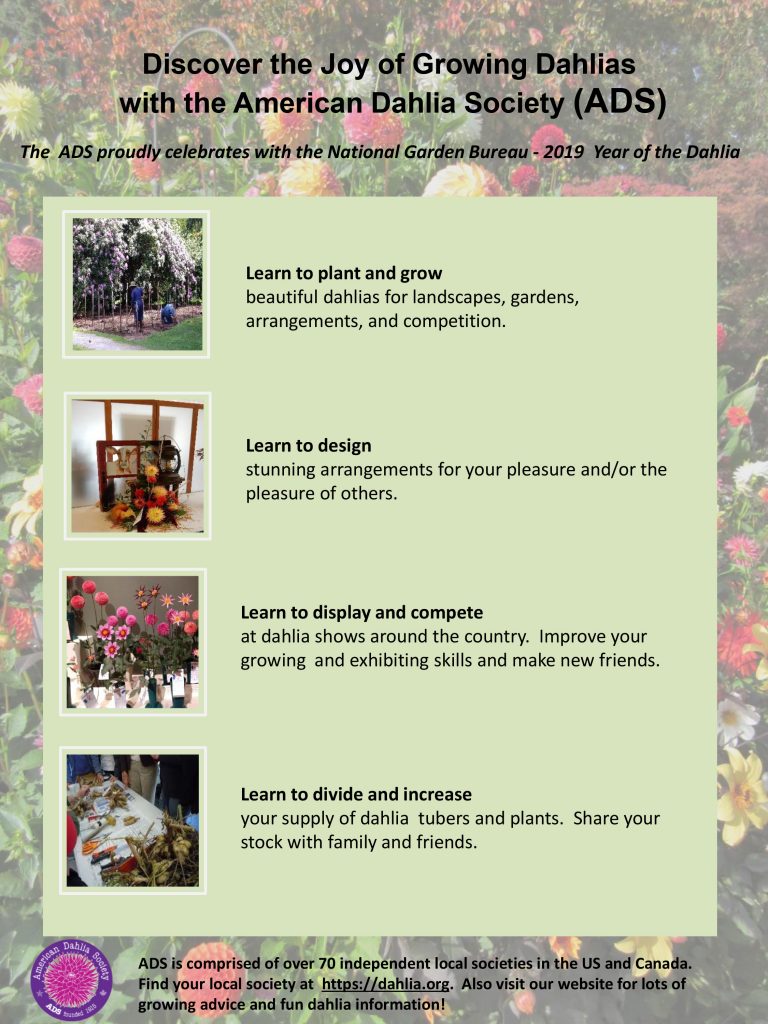 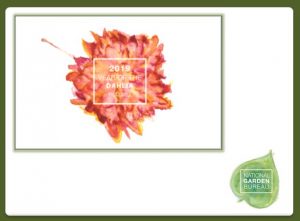 Download the Year of the Dahlia presentation on SlideShare.